Get Your Game Face On!

Get Your Game Face On!

Every once or twice a month at Emakina, knees get weak and hands are shaking. Not because we’re anxiously waiting on a reply from a pitch we did – although that occasionally happens too. But rather because everyone’s looking at their cards, pawns or whatever else it is you’re playing with at Board Game Night.

Let’s be real, the term ‘board game’ probably makes you recall awful family evenings filled with extremely random Trivial Pursuit questions, seemingly endless Scrabble games, or insulting each other over Monopoly. But those well-known games aren’t exactly the most interesting ones. Or, well, after having played them over a hundred times, they aren’t as much fun anymore.

Monopoly and the like give board games a bad rap. So it was time to freshen up that image. Enter Board Game Night. Bet you never heard of Seven Wonders, Robo Run, Exploding Kittens, or Camel Cup. (Then again, maybe those last 2 don’t sound very appetizing… Did we mention there’s food?) 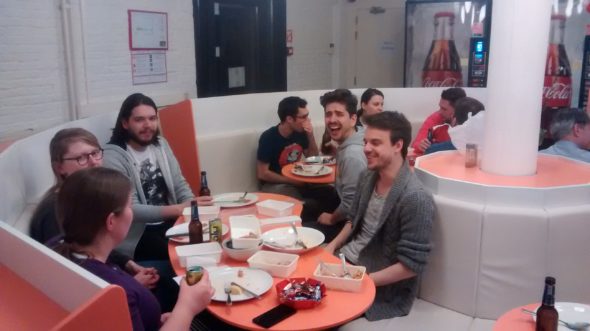 Pictured: fun & food! Oh wait! Is that beer? Only one way to find out: coming to the next board game night!

People get together after work and after a short introduction to the different games, everyone is free to join whatever game they want. The evening usually starts with a few fun and short games which is perfect to rewind from work. Food (pizza!) gets delivered and everyone eats together, after which one or two longer (usually more strategic) games are played.

It’s the perfect occasion for discovering new games, but also to get to know your (new) colleagues (better). All work and no play is boring. Better get that game face on! 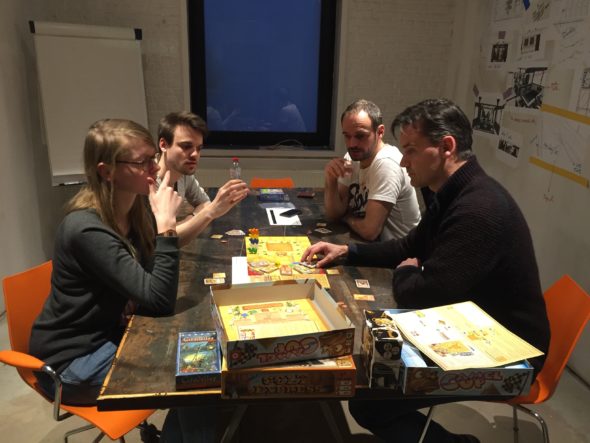 “Should I win or should I ask for a raise?“