Alexa, Amazon’s voice-driven virtual assistant, today already recognizes about 7,000 externally-developed integrations. According to Amazon, tens of thousands of developers are hard at work to expand the Alexa skills list. With these skills, you make dear Alexa do just about anything, from reading recipes for you to controlling household appliances.

With a growing number of customers showing interest in Alexa, Emakina decided it was high time to get the creative juices flowing and create some applications for it.

The assignment was simple: Hack a new Alexa skill.
And after 24 hours, you must show us a (preferably working) demo. All teams show their brain child to the jury, who rates its creativity, relevance and technique. The best team then goes home exhausted, but over the moon, loaded with great prizes!

And the winning team is…
Stephen Hawking’s School of Dance’ won, with their fabulous A.L.F.R.E.D., the Automated Liquid Fun Refreshments Dispenser. Sounds bizarre maybe, but their voice controlled cocktail maker in fact was pretty impressive. The total solution consisted of an Alexa skill for voice input and output, calling a web service.

The web service is A.L.F.R.E.D.’s brain, filled with all kinds of logic regarding recipes. The web service in turn calls on an Arduino via the serial port, and the Arduino controls the six pumps and 32 LEDs. Are you with us, so far? Cheers, then! 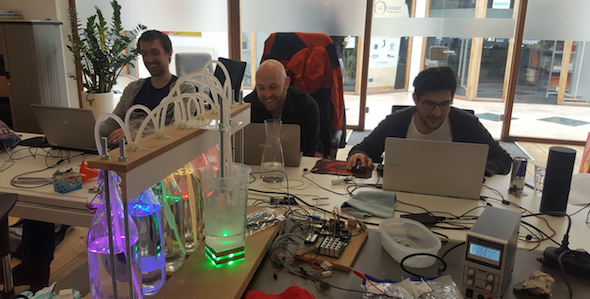 Young master A.L.F.R.E.D. had 7 drinks available for us, and could mix the following top cocktails with these ingredients:

The jury was impressed with the complete and well executed draft of the concept, with the team practically making a whole profession obsolete in just 24 hours. From the very first moment, it felt natural to order a cocktail using your voice. The concept works so well that a more fine-tuned version will find its place in Emakina’s new office, to be opened soon!

The brilliant victory was celebrated following the logic of the project, so A.L.F.R.E.D. had quite some work all evening. When he was out of gin, A.L.F.R.E.D.’s stock was filled with Red Bull, expanding his repertoire with some fancy additional recipes. Truly an agile solution, right?

Let’s not forget the fine work of the other teams…
Here’s a brief overview of the Alexa skills they developed:

Team ‘Los Vencedores’: Casandra
In 24 hours this team developed an Alexa skill, offering a listening ear to employees and analyzing their emotional state. The jury was delighted by the “hack” that the team had developed to make Alexa start the conversation, as well as the use of every cloud under the sun. Thus, the input from the employee was sent to IBM Watson’s cognitive APs for sentiment analysis.

Team ‘Alexa, surely you can not be serious’: MagicMirror
The team presented the jury a MagicMirror for use in fitting rooms. The user for example can indicate that a garment is too big, signaling to instore personnel or a companion app that they should immediately bring a smaller size to the fitting room. Nice, but the jury nevertheless had some doubts if ‘voice’ is the best interface for a fitting room.

Team ‘Hostile Hacky Sac’: Vanessa
Vanessa is an office management A.I. Via this friendly skilled lady, you could log in as a visitor, including signing up your car, Find and book a meeting room, and order drinks for your meeting.
This practical concept will also be developed for the new Emakina office.

Team ‘HAL 9001’: Fritz the Fridge
HAL 9001 was the last team to demonstrate its innovation to the jury. They developed an Alexa Skill making suggestions based on the contents of your refrigerator. This team not only succeeded to build the Alexa skills in 24 hours but also added a neural network performing image recognition to determine what was available in the refrigerator.

It immediately became clear that voice interaction in the kitchen has a solid future: when your hands are full or soaked in tomato sauce, you can easily check your recipe, a real improvement.